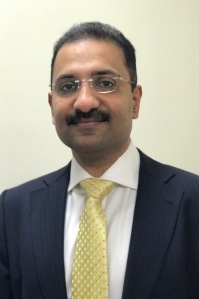 Dr Varughese was appointed as Consultant Physician at the University Hospital of North Midlands (Staffordshire) NHS Trust in 2008. He qualified in 1997 and has been working in the NHS since 1998 through various medical sub-specialty rotations as a junior doctor in the Midlands and after completing the MRCP examinations conducted by the Royal College of Physicians of Ireland and the UK, he trained in Diabetes, Endocrinology & General (Internal) Medicine on the West Midlands higher specialist training programme obtaining CCT in 2008 in these specialties from the JRCPTB. He has been instrumental in service development of various sub-specialist areas in the specialties of Diabetes and Endocrinology at UHNM and has collaborated with other regional centres.

He was awarded the Nye Bevan NHS Executive Leadership award from the NHS Leadership Academy in 2016. A significant proportion of his outpatient workload involves treating patients with Diabetes and Endocrine disorders and in conjunction he also looks after inpatients in General (Internal) Medicine presenting with multiple pathologies. He is also involved with undergraduate and postgraduate medical training and is a Royal College of Physicians examiner and SWG member for the MRCP PACES exam. He is a member of Diabetes UK, Society for Endocrinology (UK) and also a Fellow of the RCP London.

Dr Varughese treats adult patients with adrenal, thyroid, parathyroid, pituitary disease and metabolic disorders related to sodium and calcium electrolyte imbalance as well as type 1 and type 2 diabetes mellitus focusing on microvascular and macrovascular complications to cardiovascular risk reduction strategies. He has a widespread publication record that extends over a number of fields in Diabetes and Endocrinology as well as General (Internal) Medicine.